What does the name mean? "Umcolcus" is an Indian word meaning "whistling duck" The goldeneye ducks' wings whistle as it flies.

Umcolcus Sporting Camps were established in 1917, Walter Swett, a Maine Guide, leased land from George B Dunn. The camps located in in T8R6, Maine in Northern Penobscot county were referred to as " Swett's Umcolcus Camps ". In 1919, with Dunn's approval Swett sub-leased the site of the camps - including two log cabins on Umcolcus stream - to Walter D Hinds. As a condition of the lease, Almon Currier, was to be employed as caretaker of the property for as long as he desired to do so.

Hinds and crew spent a long spring, constructing a camp for Charles M Schwab, the youngest president of US Steel. Hinds supervised the blazing of five miles of trail and the building of a corduroy road to tote building materials to the isolated site, It was a difficult spring, with six foot snows and freshets that washed out the road and drowned two of the horses. When the camp was completed it was the only one of its kind in the state to feature hot and cold water and a indoor bathroom. The camp featured three sleeping rooms, a large kitchen, and a living room with a thirty to stone fireplace made with stone harvested from Umcolcus Stream. 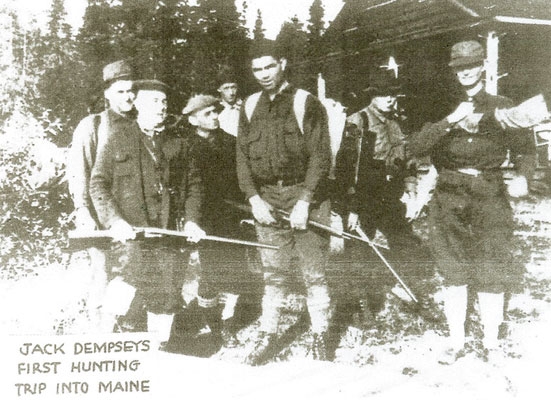 The camp also features a separate guides camp with room for ten guides, and a icehouse that held 250 cakes of ice. The pressures of world war 1 dictated that Schwab, who headed the wartime shipbuilding effort, never got to hunt from, or even visit the camp. However, Walter Hinds was prominent enough to attract important guests, including Jack Dempsey, world heavyweight champion, around 1922. After Dempsey's visit Naomi Currier, Almon's daughter, retired the dining chair Dempsey sat in, and the chair became a display piece for many years.

Around 1925, the maincamp, kitchen and dining room were completely destroyed by fire resulting from a lightning strike. Luckily, a second large camp survived and became the main camp for many years.

In 1926, Hinds transferred the camps to caretaker Almon Currier, who ran them until declining health forced him to discontinue their operation in the late 1940's. During Almon's reign his wife Myrtie worked at the camps, prepared food for the sportsmen, referred to a "sports'.

In the 1960's Almon's son Norman Currier, a guide and woodsman, took over running the camps. His wife Jeanette continued Myrtie's role of supporting and hosting of the sports. Since the late 1970's the camps have been owned and operated by Norman's oldest son - Almon (Al) Currier, and his wife Audrey. Over the years, Al and Audrey built new camps, a shower house and in 1997, a beautiful dining room with a fieldstone fireplace.

Around 2000, Dunn Timberlands sold the land to Prentis & Carlisle Management Company, from whom the Currier's now lease the site of Umcolcus Sporting Camps.

History of the Umcolocus Sporting Camps

We hope you have enjoyed the long history of Umcolcus Sporting Camps and it is very important to me to continue this long "tradition" as the new owner. I hope that all outdoor enthusiasts have a chance to come and visit - "the way life use to be"